It has been my yearly habit to stargaze every Christmas Eve. As each year passed, I started to notice that the stars are gradually blacking out. I started to feed my curiosity with wonder and decided to investigate and research why stars are slowly disappearing.

This photo was taken just recently. If we observe carefully, we can clearly see a glimpse of light from the sky. It makes me wonder why is it that I can only see a few shining stars at night while there are thousands of them in other parts of the world?

This is where the search for the star stealers begins. My first suspect— the clouds.

In the past decades, greenhouse gases are gradually increasing which fuels climate change. It made me think that the warmer the Earth’s atmosphere, the more clouds formed and covered the sky at night, hiding away the stars. However, this does not make much sense since it does not rain every single night.

This brings me to my second and final suspect— the light.

Early people on Earth only used fire to lighten up their surroundings at night, until the light bulb was invented in 1879 by Thomas Alva Edison. Ever since the light came to life— so did the night.

Cities nowadays are covered by thousands of bright lights in every building. This kind of environment actually caused a new type of pollution that scientists call "light pollution." Among other types of pollution, light pollution is most probably the least that people talked about.

High-end cities or highly-developed urban areas are dominated by lights from shops, clubs, hotels, and even in the streets which makes it quite impossible for people to notice the light that the moon and stars emit at night. When light dominates most of the darkness brought by the setting of the sun, it makes it difficult for us to see the stars that cover the sky. The darker the place, the brighter the stars. 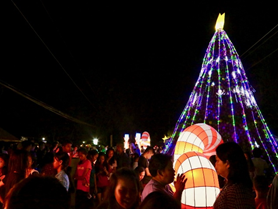 As a freshman, I have yet to visit Visayas State University (VSU) Main Campus. Nonetheless, I do know of certain traditions that the school celebrates during the holiday seasons.

One of which is the Christmas lighting ceremony.

It is an annual tradition which started in 2007. The ceremony marks the beginning of the Yuletide season at VSU where Christmas symbols like the Belen, Christmas tree, Santa Claus, and other ornaments and lights embellish the campus. This is one of the few examples of how light pollution can deceive the night sky's space aesthetic. The sky will seem to be pitch black above all the Christmas holiday lights that adorned the university's area. 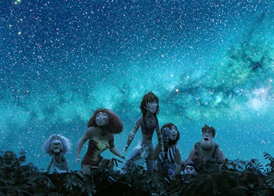 (From the left) Gran, Eep, Guy with Belt, Ugga with Sandy and Thunk, the characters from the Disney animated film “The Croods” watching the galaxy on a clear night sky scene.

Another example is the amazing scene from the Disney animated film “The Croods,” a story about the planet's early cavemen. Artificial light was not yet present during this dark age and so, the stars that powdered the milky way galaxy were clearly visible to the naked eye.

It gave us a glimpse of the panoramic view of the night sky during a time when artificial light had not yet taken over the night.

Sometimes, the most beautiful moments are seen in the dark— where the jewels of the sky shine brightest.